Rocket Spot is an app that provides orientation information based on your current location to spot rockets launched from Satish Dhawan Space Center, Sriharikota (SDSC-SHAR).

The Indian Space Research Organization(ISRO) launches rockets from the island of Sriharikota situated on the Pulicat lake. This island is about 102 kilometers from Chennai, a coastal city in the southern part of India.

Where is the rocket?

A lot of people find it hard to believe that rockets launched in Sriharikota can be seen from Chennai. That is only until they see it with their own eyes though. Earlier, as a part of the Chennai Astronomy Club's outreach activities, we used to send notifications to people asking them to look towards north a few seconds after a rocket launch. While a good number of people succeeded in spotting them, we realised that a good number of kids and surprisingly adults did not even know where north was. We had to ask people to use the compass on their phones to find north.

Where is the launch pad?

Visitors at the Pulicat Bird Sanctuary who arrive there to spot rocket launches face a different issue. The island of Sriharikota and consequently, the launch pads, are hidden by the dense vegetation on the island. Tall palm trees all over the island make spotting the launch pads impossible unless you know where exactly to look for. Coincidentally, the launch pad is almost at east when looking from the viewpoint on the Pulicat lake. This makes things even worse when a launch is scheduled to take place in the morning or early afternoon. The glare from the sun and the haze that is always present in this region complicates spotting the four lightning arrestors around the launch pad that rise above the trees and therefore serve as landmarks to us. Moreover, there are two launch pads in the island and it is important to figure out which of them is being used for the current launch. Only then can the lift-off phase of the launch and long exposures in case of a night launch be done properly. 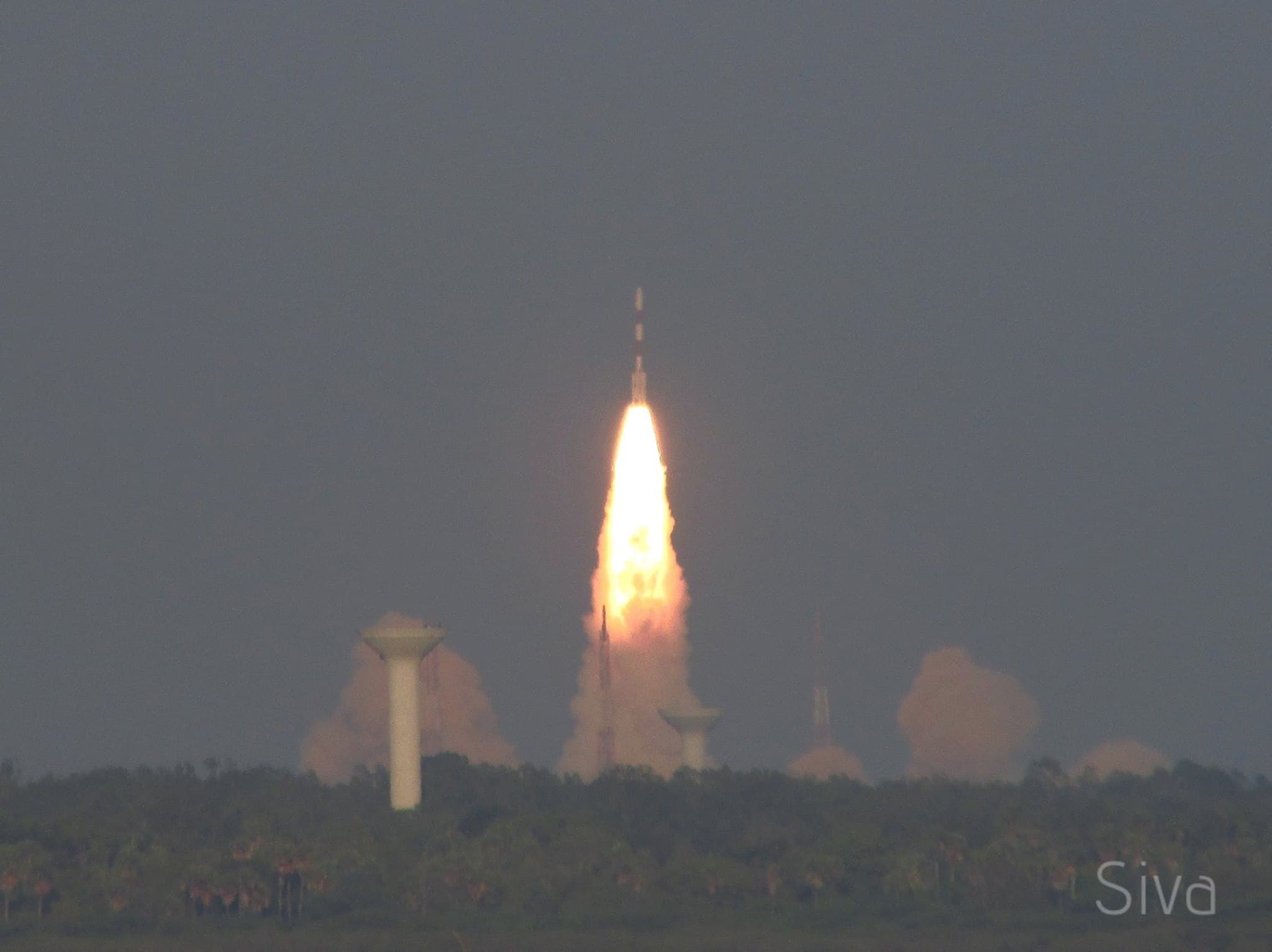 PSLV C27/IRNSS-1D lifting off on a hazy afternoon

Over the years, this viewpoint started to become crowded and we were often approached by people seeking help on spotting the correct launch pad.

This is when Kishan, a fellow astronomy geek, and I decided to write an app to try and address these. Overall, we had a few requirements:

After a bit of brainstorming, we settled upon the following UI. 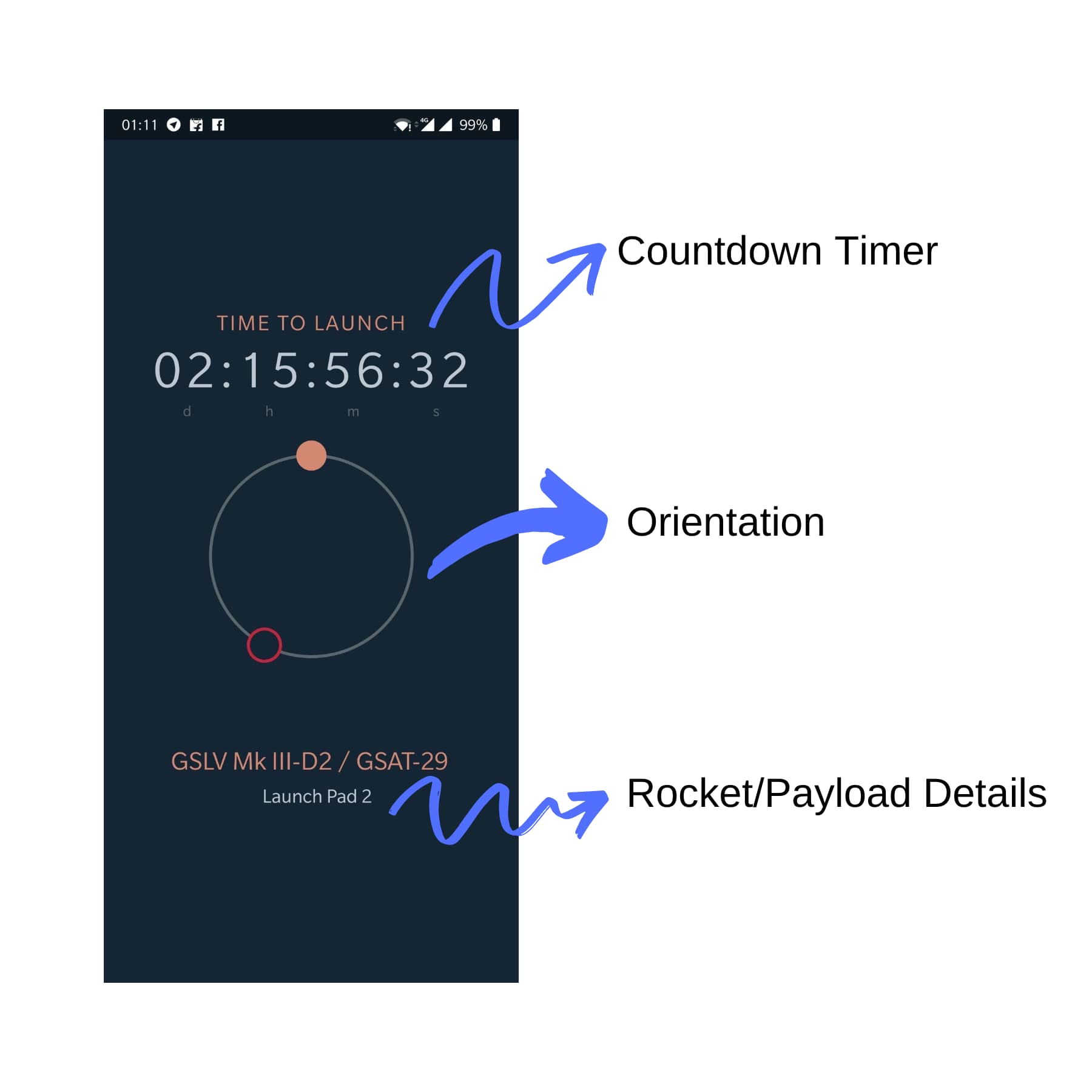 It essentially has three components:

This was essentially the core of the app. We were inspired by bubble levels and decided to implement one similar to it. Now, the only question was figuring out a way to find the forward bearing between the user's location(let's call this A) and the relevant launch pad(let's call this B). A can be trivially obtained by getting the phone's location data. To get accurate coordinates of the launch pads, we went through some NOTAM archives to get the location of the launch pads. While this could have been done with Google Maps itself, we wanted this to be as accurate as possible so we decided to use the locations provided on NOTAMs. Now that there are two coordinates, finding the bearing between them can be accomplished with the following formula[1]:

We spawned a simple API server on zeit's now.sh. It returns a JSON with the following structure:

The launch details are tracked in a Git repository on GitHub and all it takes to update the data is making a commit. Since the structure of the response JSON is rather trivial, it is a breeze to update it even while travelling.

We used React Native to build the app. As both of us have been building front-end applications for several years now, this was a breeze. There is also the advantage of being able to target multiple platforms(Android and iOS) using the same codebase.

After almost a year of using it ourselves and sharing it with people that asked for it in Sriharikota and social media, I finally published it in the Play Store last week.