There was an annular eclipse on 26 December 2019 and the path of annularity passed through Saudi Arabia, Qatar, UAE, Oman, India, Sri Lanka, Bangladesh, Malaysia, Indonesia and Singapore.

South India, which is where I come from, was on this path. A few major cities like Kozhikode(Calicut), Coimbatore, Dindigul, Ooty are some of the places that fell on the central path. The astronomy community in India started planning for events a few months before the eclipse. Some of us at the Chennai Astronomy Club also started preparing plans for the event. Like most of our outreaches, we had one goal - it should be in some place that doesn't usually see these kind of events.

I was in charge of the planning and I decided to wait till the other clubs and organisations around the country came up with their own plans. Towards the end of November, it was apparent that most of them were going towards places on the western side of the path of annularity. This was purely because of the weather. The North Eastern monsoon usually stays away from these regions and every single club had arranged for events in places like Coimbatore, Ooty, Kozhikode and Thiruppur. It was time for the Chennai Astronomy Club(CAC) to announce plans and I tentatively announced that we would be doing an event in Dindigul and started putting together a small team for organising the event.

We initially reached out to schools and NGOs in the area through friends, family and in some cases, just googling for schools and calling them one by one. About two weeks before the event, it became clear that this was not going to work out. Every single school that we spoke to had one of the following issues/excuses:

Just out of sheer luck, I was looking at the map of the annularity path and noticed something. It was passing through the town of Karaikudi. This is exactly what I wanted. One of my best friends was born there and he actually has quite a good number of contacts in that region. I plotted the coordinates of his ancestral village and it was bang on the annularity path. I immediately called him and asked, "Do you want me and my team to come to your village and teach the kids something for the eclipse?". He just said, "Tell me when and I will arrange stuff". This was exactly a week before the eclipse and I couldn't have asked for a better reply.

The team then went ahead with the planning. We made announcements that we were going to conduct an event in the Government School at Kandavarayanpatti near Karaikudi and started collecting gear. For various reasons, we decided to take a single telescope, about 500 eclipse goggles to give away and a few models to explain the reasons for the eclipse. Manick, a NASA trained educator readily joined us with his car and so it was all set.

The day of Christmas, Team CAC set off from Chennai towards Kandavarayanpatti. There were six of us. 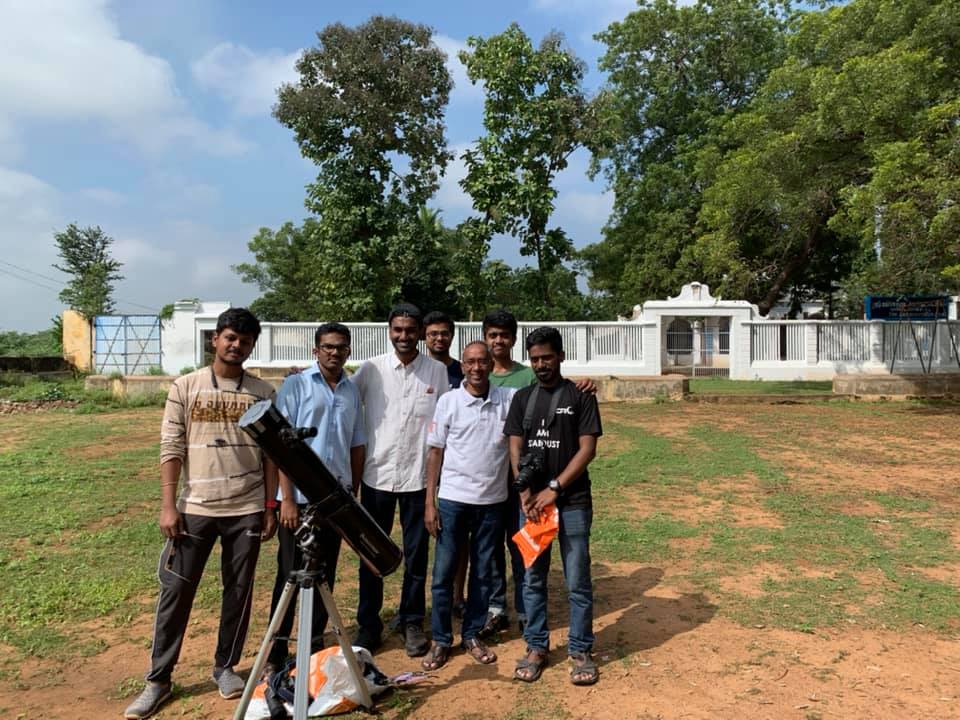 By the time we reached the village it was about 3PM and it was raining. I came to know from other groups that it was the same in places like Coimbatore as well. However, we had received a very favourable weather forecast from Tamil Nadu Weatherman so we were a bit relaxed. News also started pouring in that a few groups had abandoned their plans due to the weather and were heading to places in Kerala for good skies. We, however, decided to stay put as we had already told the local kids about the event. Arunachalan and I met with the school correspondent again and we told him that we would at the very least teach some basic science to the kids in case it got cloudy. The school correspondent asked us to keep our hopes low as there were lots of superstitions associated with eclipses and he wasn't sure if parents would let their kids outside.

The next day we got up clear blue skies. We packed our gear and moved to the school ground. Shockingly, it became really cloudy and not a single kid was present at the venue. The time was about 0910 and the eclipse had already started. We did the only thing we could - wait. Arunachalan set off to find the kids and he literally went door to door in the village and asked the kids to come to the school ground. By 0940, the clouds started showing narrow gaps and we were able to make out the eclipsed sun. Right around this time, we spotted two kids playing on the school ground. We were bored so we started talking to them.

We were showing them our cameras, telescope and slowly started to talk about the eclipse. Just then, three girls joined us. Arunachalan's door-to-door canvassing was working. 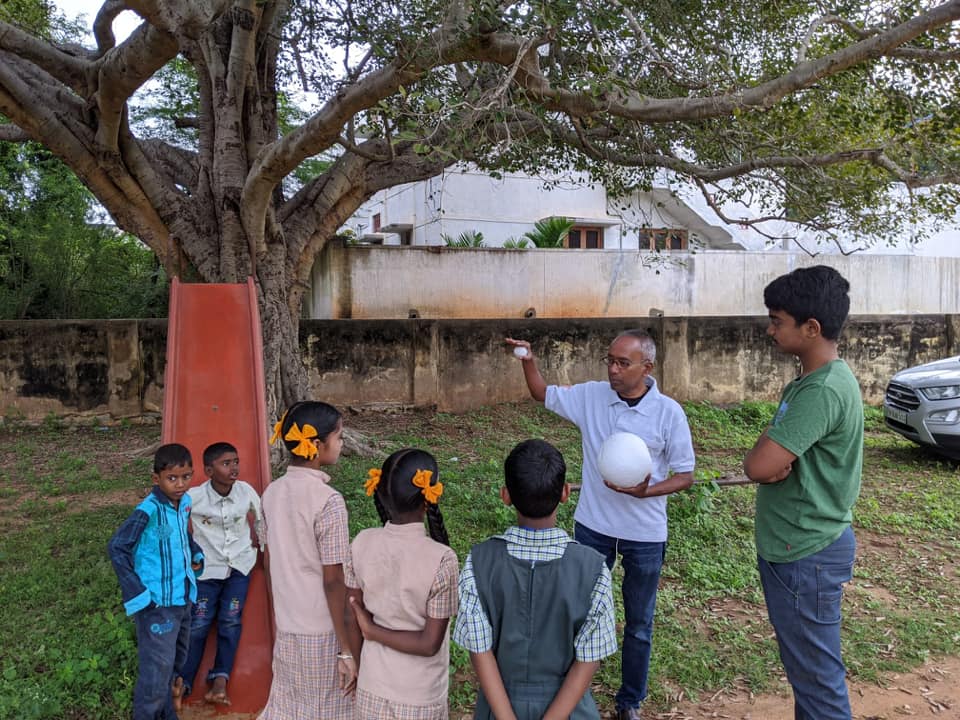 Manick immediately jumped in. Using thermocol spheres, he made them understand what really happens during an eclipse. Seeing these five kids, more kids started to join us. Word sure spreads fast in villages! A sixth standard girl in the group that we taught earlier helped us by doing the explanations herself to her peers, using the models. What a satisfying sight it was to watch! Slowly the crowd started to build up. We had close to sixty kids at one point of time! The sky had also cleared up by then.

As annularity neared, leaves started to act us pinhole cameras and the kids were just amazed at it. 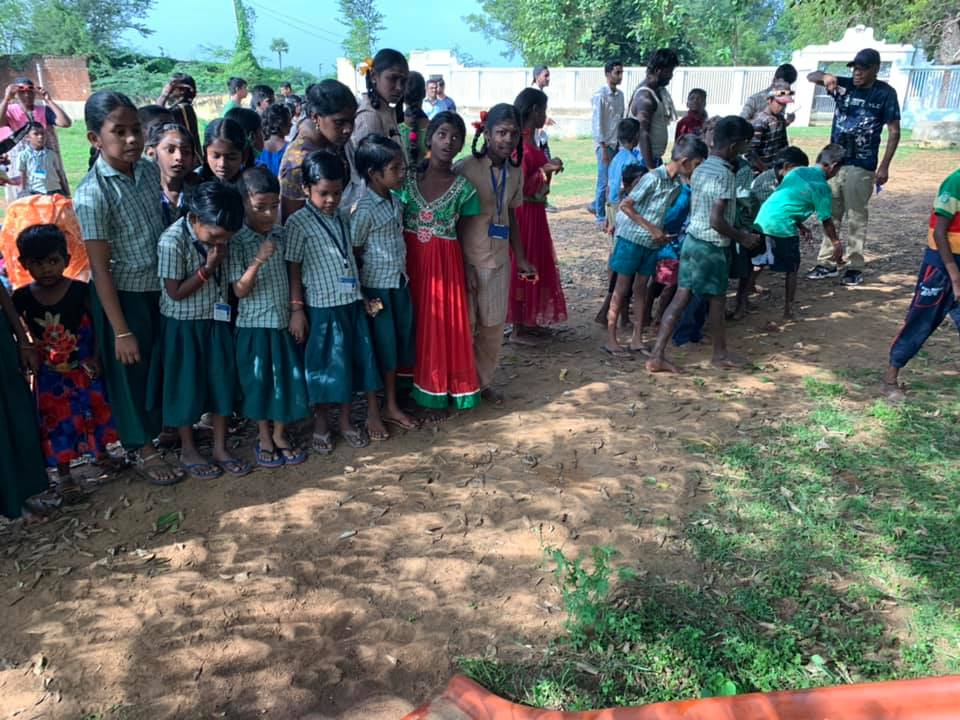 They then sat quietly waiting for peak annularity. They were whistling and clapping as the sun turned into a perfect ring of fire. 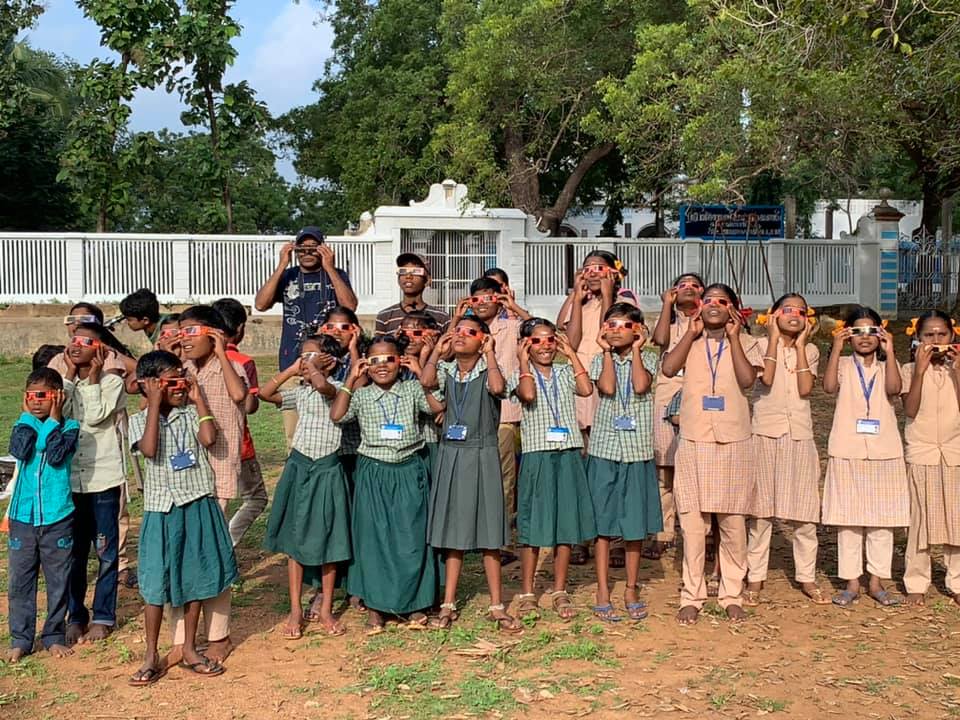 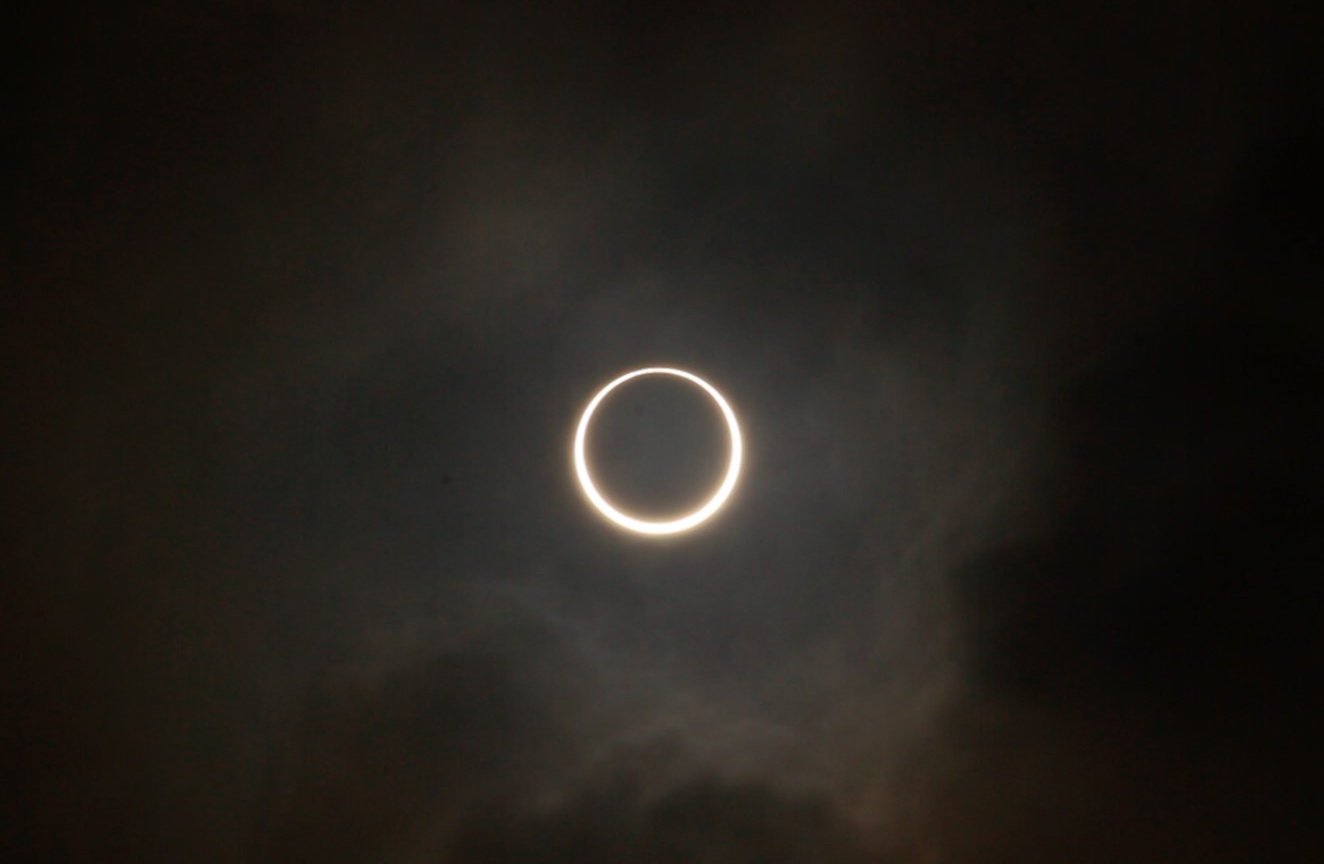 At this point, even village elders started to join us. They were all eager to learn about the science behind the eclipse. Some elder women who joined us towards the end of the eclipse promised us that they will tell their grandkids that there are no snakes in the sky and that they can eat even during the event. This to me, was the most significant outcome of the event. 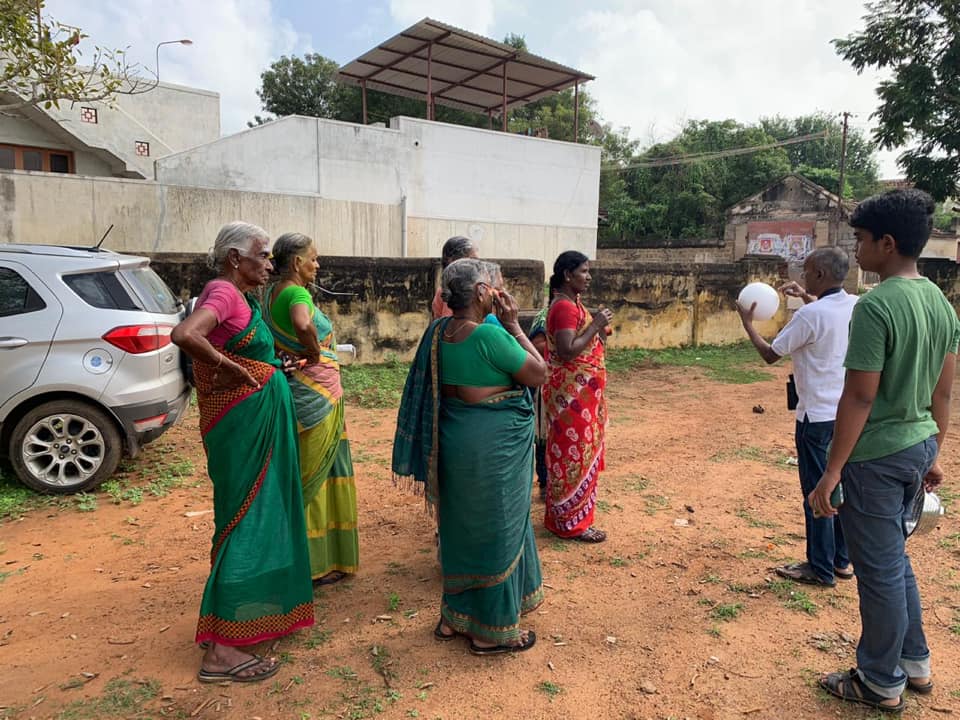 We had interacted with about 80 people during the event and even though it was not a great number compared to what we could have achieved in a major city, I believe that it had a really powerful impact. It was heartening to see the kids asking us so many interesting questions and we had a nice time answering them everything from photography to rocket science. 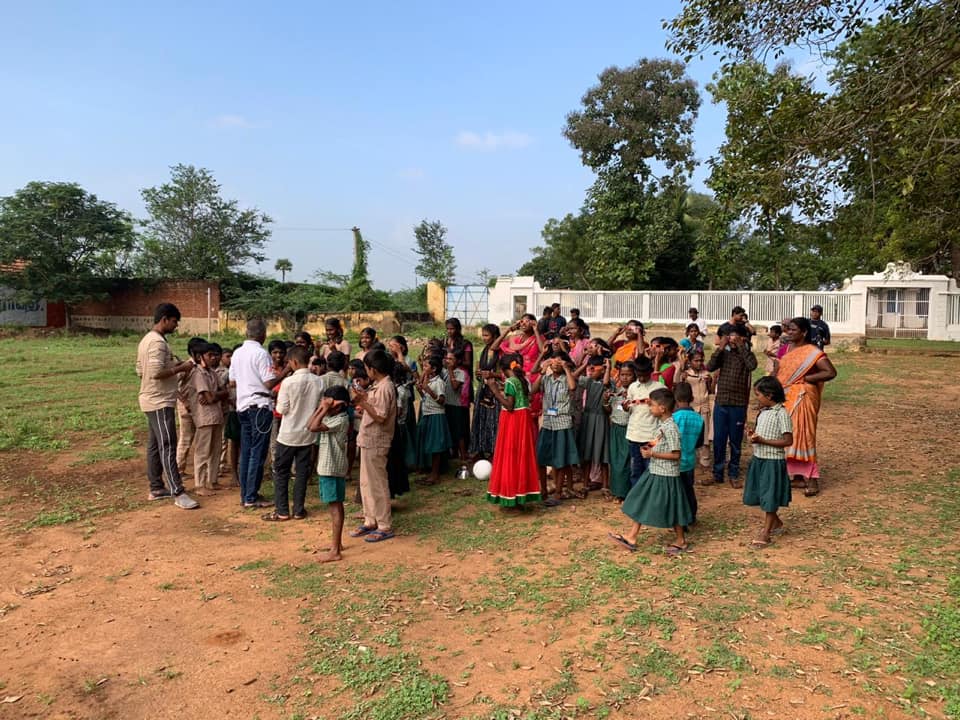 One young kid was asking questions about rockets and after listening to Deepak's(he is currently doing his PhD in Aerospace Engineering) answers, he told us that he wanted to become a rocket scientist. It was heartening to realise that we had inspired a few kids. I really hope that they go on to achieve their dreams. The school correspondent then met with us again towards the end of the eclipse. Long story short, we will soon go back to the village and conduct a night observation session for the students. This time, he has promised to bring a lot more students.

PS: If you are from a rural place in Tamil Nadu and would like us to come and conduct outreach events for school students in your place, please write to us.